To participate in their hometown of Waimanalo at Town and Country Stables for the All American Rodeo is truly special as they showcase five major Hawaiian Island Pa’u Princesses -- Hawai’i, Maui, Oahu, Kaua’i and Moloka’i.

Each Hawaiian Island Pa’u Princess wears a kepola top and pa’u bottom held up with 6 kukui nuts (no zippers and buttons) and their island's color of flowers on their body and in their upswept hair. The horses are also adorned with beautiful fresh floral leis.

Hawai’i Pa’u Riders was founded in 1981 by John & Lita Cook of Waimanalo. They were invited by Governor George Ariyoshi to represent Hawai’i in the Madison Square Garden in New York and the Veterans Day Parade on 5th Avenue in New York City.

In 2003, Lita Cook passed away and handed the torch to her daughter Leiala Cook to carry on the tradition.  Since than, Leiala has perpetuated the unique, colorful and beautiful art of pa’u in the Pasadena Rose Parade, Portland Rose Parade, and the Seattle Torchlight Parade. The Hawai'i Pa'u Riders also represented Hawai'i at the Fort Worth All Western Days Parade in Texas -- the largest Equestrian Parade in the US, held at the Will Rogers Colosseum. This was the first time to have a Hawaiian ride in Fort Worth and a special award was given for Best Historic Costumer -- an honor that had only been bestowed once previously in the past 100 years.

Hawai’i Pa’u Riders are blessed to share the Aloha spirit locally in Hawai'i parades and events as well and give their mahalo to all of their continued supporters, family and friends for their kokua. 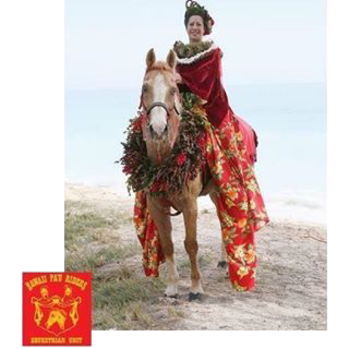